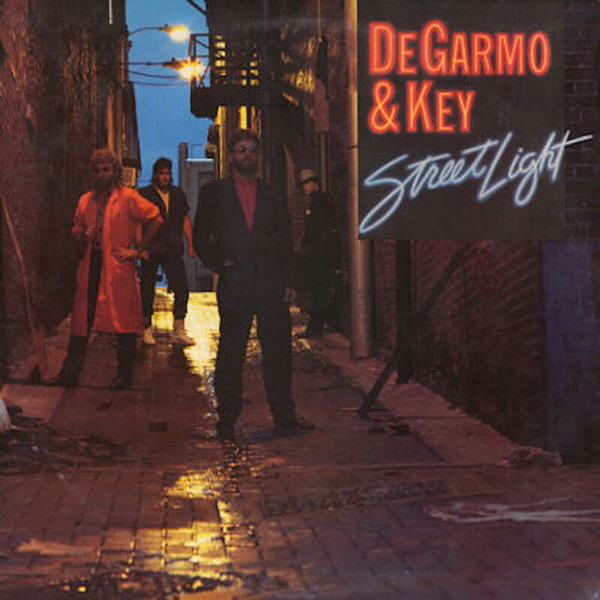 Like last week’s look at Mylon Lefevre’s Sheep in Wolves Clothing, it might be hard to pinpoint just which album from a particular artist is their particular best. Some artists have their seminal work that stands out, while others have a number of works where their audience differs on which one is their favorite.

Most artists probably fit into the latter category, and Degarmo & Key is no exception. For most fans though, it’s a good bet that their favorite D&K album–whose work spans nearly 20 years–might land somewhere in the mid-to-late 80s. That’s when D&K really hit their stride. And so today, we take a closer look at their 1986 release, Streetlight.

The band starts strong right off the bat and doesn’t lose strength throughout the whole album. Even with the third song and pop-ballad, “Addey” and the mid-tempo bluesy tunes, “War Zone” and “Soldier of Fortune,” as well as the album’s soft finishers, “Up On A Cross” and “Inside Out,” Streetlight remains a solid album with lots of oomph.

This album might also be known for something that often goes unmentioned but not unnoticed–and that’s hooky and memorable song intros. It seems the boys took intentional effort to give us a little something catchy to start their songs with–from the energetic and melodic opening to “Every Moment” to the drum and bass line of “War Zone,” the soft, synth-laden “Addey,” to the synth-crunch of “Soldier of Fortune” and then the guitar start to “Don’t Stop the Music” finishes Side 1.

Then, Side 2’s opener, “Don’t Throw Your Love Away,” starts dramatically and powerfully, and then moves onto another drum and bass start for “Video Action,” while another guitar solo kicks off “She Believes.” But probably the best song intro of the album comes next with the quirky and fun, “Holy Hustle.”

But there’s more than song intros that make this album stand out. Every song from start to finish is a well-crafted effort of clever and energetic rhythms and melodies packed with power. Not to mention throwing in some great vocal harmonies. Each member of the band stands out, from the occasional Clapton-esque guitar solos by the late Dana Key to the dramatic and melodic keyboard work from Eddie DeGarmo to the aforementioned clever drum and bass lines by Greg Morrow and Tommy Cathey respectively.

Even though not all songs on this album were released as radio singles (to the best of my knowledge), each song could have been a radio hit, proving how great this album really is. Which is why in my opinion, this is the best overall effort of Eddie and Dana’s career.